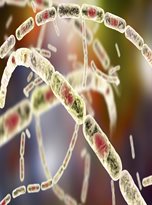 Anthrax is a serious bacterial infection caused by Bacillus anthracis. It is not contagious from person to person. The disease most commonly occurs in animals such as cattle, sheep, horses, and goats after they graze in areas contaminated with spores of B. anthracis.  The body wastes and carcasses of infected animals, or flies that eat infected carcasses, and contaminated hides and meat are all sources of anthrax. Individuals who work with animals or animal by-products or are exposed to contaminated soil are at highest risk of contracting anthrax.

The bacteria, which requires oxygen to survive, produce spores that can survive for years in dry soil but can be destroyed by boiling or treating with hydrogen peroxide or dilute formaldehyde.    Other methods that may be useful include bleach, chlorine dioxide gas, and a combined Ultraviolet-C light/X-ray system.    There are three known strains of anthrax – Ames, Vollum, and Sterne. The Ames strain, considered the most virulent, was initially isolated in Texas in 1981 and found in both the U.S. and the United Kingdom.

There are four types of anthrax – Cutaneous (Skin), gastrointestinal, inhalation, and injection.

This is the most common and least deadly form of anthrax. This form occurs when spores enter the body through openings in the skin, such as scrapes or cuts. After exposure, infection generally occurs within one to seven days.  Symptoms include bumps or blisters that may be itchy and swelling around the site. An ulcer with a black center may also form after the initial presentation.  Most people who develop cutaneous anthrax become exposed by handling contaminated animal products.  Most cases of cutaneous anthrax resolve without treatment and only between five and 20 percent of untreated cutaneous anthrax cases are fatal. With treatment, nearly all exposed persons survive.

This occurs when anthrax spores are inhaled and enter the respiratory system. The most frequent exposure to anthrax by inhalation occurs during the processing of animal by-products such as hides or wool.  Symptoms of inhalation anthrax are generally non-specific and can include shortness of breath, cough, fever, chills, extreme fatigue, head, and body aches, confusion, dizziness, nausea, vomiting, and stomach pain.  The incubation period of the illness is about one week but can be up to 60 days. Fifty-five percent of persons exposed to anthrax by inhalation during the 2001 bioterrorism attack in the U.S. survived. There is only a 10 to 15 percent survival rate from inhalation anthrax without treatment.

Confirmation of an anthrax diagnosis can include blood antibody testing or specific testing of specimens, including respiratory secretions, spinal fluid, and skin lesions. Testing must be completed before antibiotic treatment begins. More sensitive lab tests can also be performed for anthrax disease confirmation.

Persons exposed to anthrax but have no symptoms are generally treated prophylactically for 60 days with antibiotics that include doxycycline and ciprofloxacin.  Antibiotics and anthrax antitoxins are available to treat persons with symptoms of anthrax. Outcomes are better if persons receive prompt treatment as soon as symptoms develop.

One of the biggest concerns with anthrax is its potential to be used again in a bioterrorist attack. In the fall of 2001, 22 individuals developed anthrax (11 inhalation and 11 cutaneous) in the U.S. due to bioterrorism. Twenty of those cases were linked to handling mail items, and five of the 11 people who developed inhalation anthrax died.  Concerns regarding the use of anthrax as a bioweapon include the availability of spores in nature, their ability to last a long time in the environment, and the ease with which it could be added to food and water, powders, and other items without being readily detected.